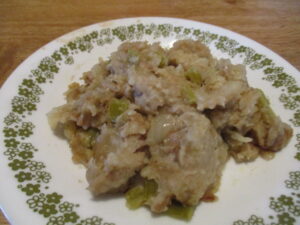 If you prefer your stuffing moist as I do, then this easy and delicious german potato stuffing is just the recipe you are looking for. I know Thanksgiving is months and months away, but there is no reason why you can’t enjoy this tasty side dish year-round.

In fact, our favorite restaurant always has stuffing on the buffet along with broasted chicken. Oh, I love that stuffing. And the chicken is to die for. I just wish the restaurant was a little closer to my home.  I would be going every week instead of our every three-month trek.

Stuffing or dressing? I have always heard that it is called stuffing when used as a stuffing for chicken or turkey and dressing when prepared separately. Why then is  “StoveTop Stuffing” called stuffing? Hmm. Just a thought.

It is just what it sounds like.  A stuffing made with mashed potatoes in it. A hint of potatoes mind you.  It really is more of a stuffing.  A moist stuffing at that. There is also a dish called potato filling.  It is reminiscent of potato stuffing but is made with more potatoes than bread crumbs.

This dish is made in Pennsylvania Dutch Country and is very popular during the holidays.  Especially Thanksgiving. See the video below

Here is what Wikipedia says about potato filling.

I prefer moist stuffing.  I don’t want that crunchy top. My brother on the other hand preferred a drier dressing with that browned top. Everyone has different tastes.

Every time I get a craving for stuffing I would attempt to make it and it always ended up dry. I was getting so frustrated. I tried using more liquid and then it was too moist.  Almost like eating bread soup.  Not enough liquid the stuffing was too dry.  I couldn’t get a happy medium until I came across this German potato stuffing. I have made it several times now when the craving hits.  Homerun! This woman is one happy camper now.

I also have an awesome traditional crockpot dressing/stuffing recipe you might like.  You can check it out here.

﻿The four main seasonings you are going to need for this German potato stuffing are salt, pepper, sage, and poultry seasoning. Salt and pepper are just a given.  They are used in just about anything you are baking or cooking. Sage is a must in my book anyway.  Stuffing just doesn’t taste right without it. But there are many who have different views on how much to use.

﻿My dad worked for our local fine dining restaurant.  One year they were catering a local company’s Christmas party and I was recruited to help.  I was mixing the stuffing and I like a hint of sage.  Not overpowering. Well, one of the owners tasted the stuffing and decided it didn’t have enough sage so she proceeded to add more. In my opinion, too much but then she was the boss.

﻿I also like to add a little poultry seasoning as well.  Poultry seasoning is a blend of sage, marjoram, thyme, and rosemary. Since it does have sage in it you need to be careful of how much to add.  A pinch or two is fine.  It saves the time of adding the other seasonings separately.

﻿I do not always have a carton of chicken broth on hand but I always have “Orrington Farms Broth Base and Seasoning” chicken flavored.  For every cup of broth needed boil one cup of water and add 2 teaspoons of the base. I am not a big fan of bouillon cubes.  Of course, homemade chicken broth is the best but then I like easy.

﻿There are many brands of bread cubes on the market such as “Pepperidge  Farm” that are seasoned.  But I do happen to make my own.  We usually have bread leftover, especially after a family together.  I just cut them into cubes and dry them in a 350-degree oven until they are just slightly browned.  Pack them into bags and freeze. That way I always have some on hand.

If you decide to use the pre-packaged seasoned bread cubes just be careful with the seasonings. The need for them may be unnecessary. But then maybe you like a stronger sage taste:)

Like Moist stuffing? If so this is the recipe for you. It's like having 2 dishes in one.
No ratings yet
Print Recipe Pin Recipe
Course Side Dish
Cuisine German

Tried this recipe?Let us know how it was!

﻿This German potato stuffing is moist and just the way I like it. I was afraid that the potato would take away from the stuffing itself.  Yes, you can taste the potato and the mashed potato texture but it really compliments the stuffing. It’s almost like having 2 dishes in one. A little gravy on top.  Oh my!

﻿Stuffing is not just for the holidays. It makes a great side dish for any meal. Having a roast.  Why not make this German potato stuffing? Fried chicken anyone?  How about pork chops?  You get the picture. Come on be adventurous.  Try something new.

﻿Please leave me a comment below with your thoughts.  I love hearing from you.