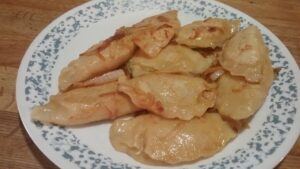 I love pierogies. And I love trying something new. So why not make homemade pierogies? And making them was easier than I thought. During a visit to a kitchen store at a local outlet mall, I found a pierogi mold, much to my surprise. Well you know, I just had to buy that nifty little tool. It made the process of making these “dumplings from heaven” so much easier.

I first learned about Pierogies when the Schwan truck used to come around. They were listed in the Schwan catalog. Hmm, pasta filled with mashed potatoes and cheese. The picture of them looked like ravioli but was half-moon-shaped. I love pasta and I have to admit I was intrigued with the idea of pasta filled with mashed potatoes and cheese. I was sold and just had to try them. When I no longer had a Schwan delivery, I have to admit I missed those pierogies. But then I found them in the frozen section at Walmart and I was back in business.

But to tell the truth, homemade pierogies taste so much better than frozen ones.

Just what the heck is a pierogi. They are dumplings filled with a variety of ingredients. My favorite is filled with cheesy mashed potatoes and onion. These are considered Ruskie pierogi and are more popular in North America. There are some filled with sauerkraut, meat, mushrooms, cheese, and sweet pierogies are filled with fruit. They are a Polish dish and at one time considered peasant food. Also known as:Perogie, pirogi, pirohy, pyrohy, varenyky, vareniki, peroge

They are cooked in boiling water, then pan-fried in butter and onion and served with either melted butter or sour cream and topped with fried onion or bacon. I have to admit that I haven’t tried pierogies with any other fillings. But I am looking forward to expanding my horizon, so to speak.

Several years ago my daughter, 2 of my grandsons, and I went to Chicago for a Cubs game. That was an adventure in itself. Anyway, I found a small restaurant during my search of things to do while in Chicago that served only pierogies and I added it to my list of places to go. Sadly, I never made it there. The restaurant had limited hours and I just couldn’t get my schedule to correspond with theirs while I was in Chicago. But on my next visit, I am going to make it a priority. It’s at the top of my list!

I discovered that there is a Pierogie festival every July in Whiting, Indiana. This would be the perfect opportunity for me to broaden that horizon I mentioned earlier. I only live about 3 1/2 hours away. My husband and I could make it a day trip. Hmm

Pierogies are also popular in Pittsburg, Pennsylvania. There is a pierogi race at every Pittsburg Pirates home game. I’m sorry but I will not be adding that to my list unless of course, they happen to be playing the Chicago Cubs 🙂

Mix together the flour and salt. Beat the egg and add to flour. Add the sour cream and softened butter and work until the dough loses most of its stickiness. This can take 5-7 minutes by hand. I used my stand mixer, but be careful that you do not overbeat the dough. Wrap the dough in plastic and refrigerate for at least 30 minutes. You can make the dough ahead and keep it in the refrigerator for up to 2 days.

Peel and boil 5 pounds of potatoes (I used red) until soft. While the potatoes are cooking, finely chop 1 large onion and saute in butter until soft and translucent. Mash the potatoes with the sauteed onions and 8 ounces of grated cheddar cheese. Salt and pepper to taste. At this point, you can fresh parsley or bacon bits if you like. Let cool and then form into 1 inch balls.

Roll the dough on a floured board or countertop until 1/8 inch thick. Cut circles of dough. 2-inch circles for small and 3 1/2 inches for large. I used my nifty pierogi mold to cut the dough. You can use a glass, cookie-cutter, or biscuit cutter. Place a small ball of filling on each dough round and fold the dough over, forming a semi-circle. Press the edges together with the tines of a fork. (my pierogies mold to the rescue)

Boil the pierogies a few at a time in a large pan of water. They will float to the top when done. (about 8-10 minutes). Rinse in cool water and let dry.

Saute chopped onion in butter until they are soft. Then add the pierogies and pan fry until lightly browned and crispy. Serve with a side of sour cream and bacon bits. I have also eaten them right after boiling and not pan-fried. Whichever way that floats your boat is fine.

If you are having difficulty getting the edges to stick together you may have too much flour in the dough. Just add a little water to help you get a good seal. After all, you don’t want the filling coming out and floating around in the pan of boiling water. You will end up with just dumplings with no filling!

This recipe makes several pierogies. If you don’t want to cook them all, you can refrigerate the uncooked pierogies for several days or freeze them for up to several months.

How I Made Homemade Pierogies

For some reason that eludes me, my husband does not like pierogies. With that in mind, I am essentially cooking for one when making these. If I followed the recipe above I would have pierogies coming out of my ears.

* I halved the dough recipe from above. You can’t half an egg so I used a small egg instead.

** I had about 2 cups of leftover mashed potatoes. I added 4 ounces of grated mild cheddar cheese and a 1/2 of a large onion sauteed in butter until soft. I warmed this mixture in the microwave until the cheese melted. Mix well and let cool enough to handle to fill the dough. This made 18 pierogies so I still had several leftovers. I froze about half of the uncooked pierogies to have another day.

If you have never tried these delicious little “dumplings” I encourage you to give them a try. You just might be surprised! If you are skeptical, try the frozen version first. You can find them in the frozen department at Walmart. But be warned, they are not near as good as homemade pierogies. But you can get a fair idea of whether they are to your taste. Give them a try!

2 thoughts on “Homemade Pierogies Recipe, So Good, And Easy To Make”