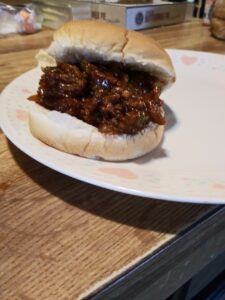 Do you make sloppy joes from a can or homemade? Nothing wrong with making it from a can.  I did for years. But I found that I was no longer able to eat “Manwich” or even the other brands on the market. So I started making my own homemade sloppy joes recipe.

It really doesn’t take much longer to make homemade sloppy joes as opposed to opening a can or jar. And to be honest the homemade tastes so much better.

I remember when I was first married.  My husband helped his dad “put up hay”. One day when they were baling hay my mother-in-law made sloppy joes and took them to the field for the men for lunch. Of course, her sloppy joes consisted mainly of ground beef with onions and ketchup.

Why Are They Called Sloppy Joes

Some say the original sloppy joe came from a cook named Joe, in Sioux City, Iowa. In 1930 he added tomato sauce to his loose meat sandwiches. A new sandwich was born and the official name.

Two other theories of the origin of sloppy joes are from Sloppy Joe’s bar in Key West, Florida, and Sloppy Joe’s Bar in Havana, Cuba. To read more on this go here

There are many different names for sloppy joes depending on what region you are in in the US.  Such as barbecues, dynamites, gulash, sloppy janes, slush burgers, steamers, wimpies, and yum yums. And with the different names, you will also find many variations of the recipe.

In a medium skillet melt a tablespoon of butter, add the chopped onions and green pepper.  Saute until tender and onions are translucent. Remove and set aside.  In the same skillet brown the ground beef. Drain grease and add the onions, peppers, and the rest of the ingredients. Stir well. Simmer for 10 minutes.  Serve on buns.

What To Have With Sloppy Joes

I usually have french fries as a side dish but today I had some fresh green beans in the fridge, which I had cooked the day before.  My husband likes fresh green beans the next day.  He says they taste better. I also sliced some tomatoes from our garden. You can have pretty much anything as a side dish.  Another great idea would be coleslaw.

One day I decided to have sloppy joes for supper at the last minute.  I was low on bread and there were no buns in sight.  The hamburger was already thawed out and sitting in the fridge.

It was too late to even think about making my own.  So I rummaged around in the fridge and found a can of biscuits.

What to do? Then it came to me.  I went ahead with my plan of making sloppy joes.

But I put the mixture in an 8×8 baking dish and placed the biscuits on top. Baked it for about 15 minutes in a preheated 375-degree oven

Just until the biscuits were nice and golden brown. Not too bad for a meal on the fly.  I have seen recipes for sloppy joe biscuit bake. But cheese was added to the mixture.

I don’t put cheese on my sloppy joes and I didn’t add cheese to the bake.

Sloppy Joes is one of my son’s favorite meals.  Add some french fries and the boy is happy. Oops, he isn’t a boy any longer. I made sloppy joes frequently when my kids were younger and still at home.

Of course, I used the famous “Manwich” sauce and just added the ground beef.  It was a fast and easy meal and something that they liked.  A win-win in my book.

There are always a couple of picky ones in the bunch that doesn’t like onions or green peppers. To solve that problem, omit the green peppers and use onion powder or very finely chopped or minced onions.

I made the mistake of not doing that and of course, my grandson and son-in-law saw the “green stuff” and refused to eat the sloppy joes.

Sloppy joes have become an American classic.  Who doesn’t like that “messy” sandwich? Well excluding the picky ones of course:)

How do you make sloppy joes? Homemade or from a can or jar? Which do you prefer?

I hope you give this homemade sloppy joes recipe a try.

Please leave me a comment below and as always