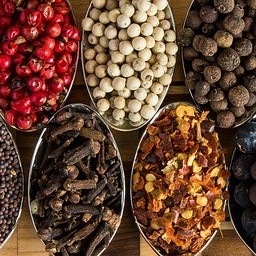 Spices and herbs are used for many things like medicinal purposes, healing purposes, and cooking.  Since of course, this website is about home and cooking we will focus on cooking.  So what is the difference between spices and herbs and what kinds are used in cooking?  We will explore the difference between the two, the most popular, and which ones to use in what dish and why.  Food tastes so much better when it has been flavored right and spices and herbs do the job quite nicely when used properly.

Spices are from the seed, fruit, root, and bark of a plant and are used primarily for flavoring, coloring, or preserving food.  Some spices have antimicrobial properties and might explain why it is used in meat which is susceptible to spoiling.  The most common spices used in cooking are black pepper, ground ginger, cumin, nutmeg, cloves either ground or whole, chili powder, curry powder, garlic powder, and paprika.  These are just a few and there are many others. Now let’s talk about each one of the above and their uses in cooking.

Herbs are the leafy green or flowering parts of a plant and are used either fresh or dried.  The most common herbs used in cooking are Basil, chives, cilantro, dill, rosemary, thyme, sage, marjoram, and parsley.

Dried herbs are usually more concentrated and potent.  So use less dried spices and herbs vs fresh. The general thought is to use 1/3 less dried herbs than fresh. For example, if the recipe calls for 1 tablespoon fresh use only 1 teaspoon of the dried herb.  To store fresh herbs it is best to get a paper towel and wrap it around the fresh herbs. Place in a plastic bag and store in the refrigerator They will last 2 to 3 weeks. Store dried herbs as well as your spices in plastic or glass-lidded jars.  Do not store them near your stove, dishwasher, or any heat source such as vents.  Also, note that dried herbs and spices do not spoil but will lose their flavor over time.  Keep your spices no longer than 4 years and your dried herbs no longer than 3 years.

Food tastes so much better when they are flavored with herbs and spices. And using the correct spice and/or herb is like using the correct purse to compliment your outfit. I have only covered a few herbs and spices.  There are so many more that if I even tried to cover them all I would be in front of the computer typing away for days and have pages and pages. I tried to cover the most popular used herbs and spices. I hope that you found this helpful in your cooking. Go ahead and spice up your food.  It will taste so much better.  You can find great deals on spices and dried herbs here.

As an Amazon Associate, I earn from qualifying purchases at no additional cost to you.

Feel free to leave a comment below and tell me your favorite herbs and spices that you use or let me know of your experiences with using spices and herbs.