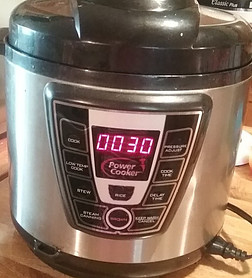 Pressure cookers have been around for a long time.  But in recent years the electric pressure cooker has gained popularity. The reason: Not only do these fantastic machines pressure-cook, but they have many other functions such as steaming vegetables, slow cooking, stew, rice cooker, browning and some make yogurt. So really, it is a multi cooker

.  They are generally easy to use due to digital settings and controls. The ability to cook food quickly and to electronically set the time and temperature plus being more energy-efficient than cooking on the stovetop or oven has made them more appealing to the home cook.

When the craze started, I was curious. I wanted to make beef stew but didn’t want to wait all day for it to cook. So yep, I did it. I went out and bought myself an electric pressure cooker. And I have to admit I absolutely loved it. I can make my hearty beef vegetable soup in 30 to 40 minutes depending on how tender you want your meat. Amazing! The electric pressure cooker I bought was a Power cooker. I don’t believe the instant pot had made an appearance yet.

What Exactly Is Pressure Cooking?

The pressure cooker is a sealed pot that food is cooked by a boiling liquid such as water or broth. The steam builds in the sealed pot thereby increasing the internal pressure and allowing the temperature to rise resulting in food cooking quickly. For a better explanation check out this video:

The Advantages Of An Electric Pressure Cooker

The Disadvantages Of An Electric Pressure Cooker

You can’t monitor for doneness.

You can’t add or adjust seasoning to the food

In order to inspect the food the pressure cooker needs to be opened and this stops the cooking process.

But honestly, the advantages greatly outweigh the disadvantages.

Several years ago I told my boss that you can make ham and beans in an electric pressure cooker and they will be done in 30 minutes.  Well, she didn’t believe me.  So I was on a mission to prove to her that it can be done. I went to my local grocery store and bought the ingredients I needed. Now I usually soak my beans overnight but I had heard that it was not necessary when cooking them in an electric pressure cooker. But the creature of habit that I am I went ahead and soaked them the night before.

Two hours before I had to leave for work I put the beans, a small chopped onion, and a small bone-in ham into the cooker. Added water to about an inch above the beans, closed the lid, and set it to cook for 30 minutes. When the time was up I had ham and beans cooked to perfection.

I took a bowl of those beans to my boss but she didn’t believe that I had cooked them in the electric pressure cooker. But I was prepared as I had taken pictures of the process to show her. Needless to say, she was amazed. And she expressed that she was going to have to get one.

Do You Need An Electric Pressure Cooker?

They are known as a multi-cooker so you can get rid of those other appliances.  You won’t need them. They cook food faster so if you have a busy life you can still get a great meal on the table in no time. They are easy to use and energy-efficient. They retain nutrients in your food unlike boiling them away with stovetop cooking.

They are many brands of electric pressure cookers. One of the most popular is the instant pot.

Do you have an electric pressure cooker? If so do you like it? Please leave me a comment.

8 thoughts on “Why Is The Electric Pressure Cooker So Popular?”