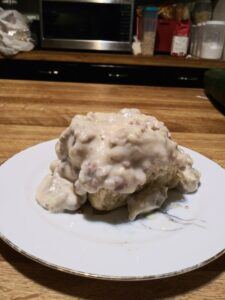 Gravy and Biscuits is one of my husband’s favorite meal. I swear I think he would eat it every day if he could. It never fails that when we go out for a meal and they serve breakfast all day he will order gravy and biscuits.

It is just one of those meals that can be enjoyed not only for breakfast but for supper as well. There have been many times I have prepared this meal for supper. Actually, to be honest, I have made it more for supper than I have for breakfast. Add some hash browns or fried potatoes with onions to make this an outstanding meal.

I have seen gravy made in many ways. One way is to brown the meat and then drain the grease and measure the amount of the grease needed to make the gravy. I don’t do it this way. Too many steps. I like simple:) Brown your meat and then add the flour to the pan. I start with a pound of pork sausage and use half of it to make patties.

Fry the patties until done and transfer them to a plate covered with a paper towel. Then crumble the other half into the frying pan and brown. Once browned add about 2-3 tablespoons of flour and mix well. Cook the flour in the meat for about 5 minutes. Add 2 to 2 1/2 cups of milk and continue stirring until the mixture bubbles and thickens. Salt and pepper to taste. Ta-Da!, Gravy!

When the gravy comes to the bubbling stage it will get no thicker. Start with 2 cups of milk and let the mixture come to a bubble, if gravy is too thick for your taste just add more milk until you get it to the consistency you want.

Making gravy is trial and error. The first time I made gravy, it was a disaster. Practice makes perfect! It took me several attempts to get it just right. (and I mean several). Where I prefer a thinner gravy, my husband prefers it thicker. So I try to make it somewhere in between. That way both of us are happy. Makes for a more harmonious evening.

You are going to think I am crazy, but I prefer my gravy over a slice of bread instead of biscuits. My husband loves those biscuits you get out of a can! Yes, a can. I guess you can say we are both a little crazy in our own kinda way. If I was going to eat my gravy on biscuits, I want good homemade fluffy biscuits.

I am in the process of trying to convert my husband to my way of thinking:) I found a wonderful recipe for homemade biscuits that absolutely melt in your mouth.

Of course, I still eat my gravy over a slice of bread, but the warm biscuit with melted butter is music to the mouth. I think I may have been successful in my quest. I made these biscuits and He liked them! Score one point for me. That doesn’t happen very often so I will bask in the limelight for just a little while.

One of our favorite places to eat is Denny’s. And of course, every time we go there my husband orders….. You guessed it. Gravy and Biscuits. This meal comes with a side of hash brown potatoes.

Now don’t get me wrong, I like hash browns but I really prefer some good ole fried potatoes with onions. And there is no place to get a decent plate of these potatoes but at home.

I have never come across a plate of fried potatoes and onions that I liked in any restaurant I have ever been to. Now I do have to admit that I had an aunt who made these better than me. (Boy do I miss her). She made the best fried potatoes but mine are a close second.

But don’t forget the onions. Fried potatoes are NOT fried potatoes without the onion. It gets a little complicated in my household when I make a pan of fried potatoes for the whole family. My son-in-law and grandchildren do not like onions and will not eat them if there is just even a hint of onion in them. So… what do I do? I make them without the onions:( And yes I eat them, I just wish I could convince them of what they are missing. But to each their own right?

What we do for our family.

Which do you prefer? Fried potatoes with onions or without? Or Hash browns?

Back To The Gravy

Everyone has their own tastes. Now don’t think I’m crazy but I absolutely love bacon gravy. So much more than sausage gravy. I made this quite frequently when my kids were little. Dice the bacon and fry in a skillet, add the flour and milk and cook until the gravy thickens. (Again making gravy takes practice). Salt and pepper to taste. Serve over biscuits or bread. Heaven!

Who doesn’t like bacon? In my way of thinking, bacon makes everything better. If you have never had bacon gravy, give it a try. You just might prefer it over sausage.

So whether you make sausage or bacon gravy, eat it over can biscuits, homemade fluffy biscuits, or a slice of bread. Make fried potatoes with or without onions or hash browns. This meal is just not for breakfast. Enjoy it for supper as well. There is no right or wrong here.

There is also a dish called SOS (shit on the shingles) that is made with ground beef and served over toast. I make it just like my sausage or bacon gravy. So many ideas for a filling meal. Give one or all three a try.

Do you eat gravy and biscuits for supper? Let me know by leaving a comment below. 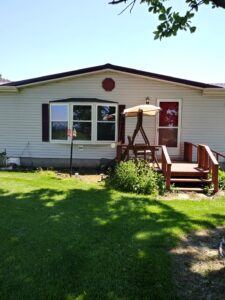 As an Amazon affiliate, I earn from qualifying purchases at NO additional cost to you.