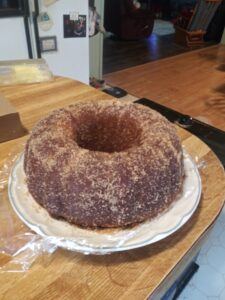 Apple cider donut cake is a cake made with apple cider, applesauce, and spices and yes it tastes just like a big giant donut! It’s light and fluffy oh so good!

I don’t know about anyone else but I love cake donuts.  So a cake that tastes like a donut intrigued me so much that I knew I just had to try it. I never realized what I was missing until I tasted this cake. My first thought was “where have you been my whole life”.

Apple cider brings thoughts of fall to my mind.  We are not quite there yet but the days are getting shorter with hot days and cool evenings and mornings.

So maybe I am jumping the gun so to speak but I knew I just had to try this cake although technically the fall season is not here just yet…. it is getting closer every day.

My oldest grandson was at my house when I mentioned I was going to make this cake for our little family gathering that evening.  He wasn’t too impressed.  But then he is a pretty picky eater.  All he would say was “ok grandma, I’ll try it”.

If you let apple cider sit long enough it will ferment naturally and become hard apple cider, the adult version of apple cider.

Apple cider vinegar is mostly apple juice, but by adding yeast it turns the sugar in the juice into alcohol. This process is called fermentation. Bacteria turns the alcohol into acetic acid. and that’s what gives vinegar its sour taste and strong smell. Read here to see what Wikipedia says about apple cider.

Just remember you want to use apple cider in this donut cake.

I made my own applesauce for this donut cake.  I know it is an extra step but it is what makes this cake so special.  You don’t need much. I made the applesauce the night before and just refrigerated it until I needed it the next day. That way it was one less step to do.

Peel, core, and chop apple.  Add the 1 cup apple cider and chopped apple to a small saucepan. Cook on medium-low for about 20 minutes or until the cider has almost evaporated and the apple is cooked down and soft.  Mash apple with a fork until you do not have any large chunks. Refrigerate until needed. For the cake, you need 2/3 cup applesauce.  I was just shy of this by a couple of teaspoons. I just happened to have some applesauce in the pantry so I just added what I needed.

The next time I make this donut cake I think I will use 2 apples and 1 1/2 to 2 cups apple cider.  That way I know I will have enough.  I would rather have more than not enough! I will just eat the extra applesauce:)

In a medium-size bowl mix apple cider and applesauce together and set aside.

In your stand mixer with the paddle attachment, cream the sugars and room temperature butter. Add 1 egg at a time mixing well after each addition. Add Vanilla extract. Alternating add applesauce mixture and dry ingredients. Starting with dry ingredients and ending with wet ingredients.  Pour mixture into a well-greased regular-size bundt pan.  I used cooking spray. Make sure to coat all the nooks and crannies of the pan for an easy release.

Bake in a preheated 350-degree oven for 50 to 60 minutes or until a toothpick inserted into the middle comes out clean.  Mine was done in 50 minutes. Transfer to a cooling rack and cool completely.

Remove cake from bundt pan and brush cake with melted butter. Mix sugar and cinnamon together and rub into the cake.

I am so proud at out the finished cake looked and tasted.  My oldest grandson did “try it” as he promised.  I have to say that he wasn’t too impressed tho.  But my second oldest grandson was a different story.  His exact words were “Grandma, that cake is really good”.

I think I may just have to make this cake again for Thanksgiving.  I love when my family approves of my cooking and baking.  I feel that I have done something right.  But then again you can’t please everyone.  Especially those “picky eaters” of the family. But I will take this as a win.