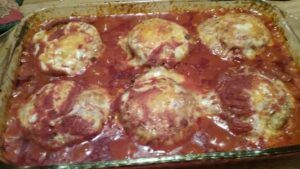 My husband puts out a vegetable garden every spring. Except for one year.  Read about that here  I always like to add something different each year.  One year we did snow peas.  I wanted to try growing eggplant. We had moderate success.  I tried frying it like I do my zucchini. But then I found a recipe for eggplant parmesan.  I like lasagna and this was similar.  I tweaked it to our liking and it was a hit!

I decided to make some for my co-workers to try. Needless to say, it was a hit there as well. Many had never had it before. I gave the recipe and eggplant to one co-worker.  She made it for her husband and thereafter was making it at least once a week. He liked it that much!

The next year I had many ask me if I had any eggplant. Sadly,  our crop of eggplant didn’t do as well that year.

Eggplant is a vegetable that grows in a variety of shapes sizes and colors. The most common variety in the United States is the globe and Italian. Tear-shaped with glossy purplish-black skin.

Eggplant flesh is smooth. Its numerous seeds are small, soft, and edible, along with the rest of the fruit, and do not have to be removed. Its thin skin is also edible, and so it does not have to be peeled. Because of the eggplant’s texture and bulk, it is often used as a meat substitute in vegan and vegetarian recipes. Eggplant will absorb the flavor of whatever it’s cooked with, thereby enhancing the flavors

The taste of eggplant is similar to summer squash.  The taste can be slightly bitter but rinsing draining and adding salt before cooking eggplant may alleviate this. I wanted to try it as I had heard that it tasted like zucchini and I love fried zucchini.  The taste was close but in my opinion, fried zucchini is better.  But… Eggplant Parmesan is a totally different story.  I love eggplant made this way!

Dip eggplant into beaten egg and then into bread crumbs. Fry in a skillet with oil until brown.  This only takes about a minute.  They brown quickly.  Turn and brown the other side. Don’t overcrowd the slices in the skillet.  Brown about 3 at a time. Place fried eggplant on a plate covered with paper towels to drain.

I have to be honest here. I do not care for parmesan cheese and usually omit it. But then it isn’t eggplant parmesan is it? Can I call it Eggplant Lasagna? What would you call it without the parmesan cheese? But then most people like parmesan cheese.  I just happen to be one of them who doesn’t.

There are many ways to cook this wonderful vegetable. Bake it in the oven, stirfry, mash into a dip, Roast, stuff it, Grill it, Add it to pasta. There are many possibilities but my favorite way is, of course, eggplant parmesan. The eggplant absorbs the sauce, becomes tender, and develops a rich complex flavor.

A great vegetable to use as a meat substitute in vegan recipes because of its texture and bulk.

A fresh eggplant has tender skin so there is no need to peel it.  The reason I peeled mine in this recipe was due to the age of the eggplant. Remember, the fresher the eggplant the more tender the skin. The small seeds are edible which makes the vegetable easy to work with.

You could make your sauce from scratch but I am all for easy.  Nothing says you can’t make something taste great just because you took the easy way.

Give this easy eggplant recipe a try.

I would love to hear about your experience.  Leave me a comment below. And as always