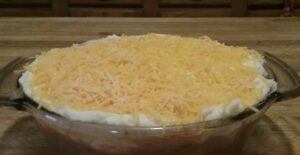 When I first made this easy shepherd’s pie, my children were small and I was not working outside the home. It was a great meal and cheap too.  The recipe consisted of 3 ingredients and the mashed potatoes were served on the side of what I called this meal  “poor man’s stew”. In recent years, I have tweaked this into an easy shepherd’s pie recipe. It is considered comfort food in my household and remains budget-friendly.

A traditional Shepherd’s pie is made with lamb. It consists of meat and vegetables and is topped with mashed potatoes and baked in the oven.

Add a can of tomato soup and Viola! you had a hearty, cheap “stew”.  In my family, we ate mashed potatoes alongside this “stew” for a filling meal.

What Started Out as “Poor Man’s Stew”

1 pound of ground chuck/hamburger meat browned in a skillet.  Drain the grease from the meat and add 1 can of tomato soup and I can “veg-all”.  Add 1/8 to 1/4 c sugar (optional) and salt and pepper to taste. I add sugar to any dish that has tomatoes in it. But you can leave the sugar out if you want to. Mashed potatoes served on the side and you have a cheap but satisfying meal.  It was also a way to get the kids to eat vegetables 🙂  In later years I have adapted this “stew” into a shepherd’s pie.

My Version Of Shepherd’s Pie

Brown the meat in a skillet with the chopped onion. Once browned, drain the grease from the meat and add the spices, tomato soup, and the can of mixed vegetables.  Mix well. Add this mixture to a 2-3 quart baking dish that has been sprayed with nonstick cooking spray. I like to use a casserole dish similar to this one

Meanwhile, peel and quarter 1 1/2 pounds potatoes (about 4-5 large potatoes) and cook covered with water until tender. This usually takes 20 -25 minutes.  I add salt to the potatoes while they are cooking. Once the potatoes are tender, drain and mash with an electric beater with a couple of tablespoons of milk.  Add 1/4 c sour cream and salt and pepper to taste.

Spread the mashed potatoes over the meat mixture covering the meat completely.  Sprinkle the top with the cheese.  Bake in a preheated 350-degree oven for 30 minutes or until cheese is melted and golden brown.

You don’t have to spend loads of money to put a tasty meal on the table. You can be inventive and may end up with a winner. There are also times you may end up with a flop as well.  But you never know.  Using the right combination of spices or herbs can really add flavor to an otherwise “dull” meal.

Go here to see the difference between spices and herbs and some of their uses. Don’t be afraid to experiment. You just might end up with a winning combination.

You can serve this meal as it was originally intended, with the “stew” served with a side of mashed potatoes or and make it a shepherd’s pie.  Either way is a winner.

Please leave a comment below and let me know what you think of this simple meal.